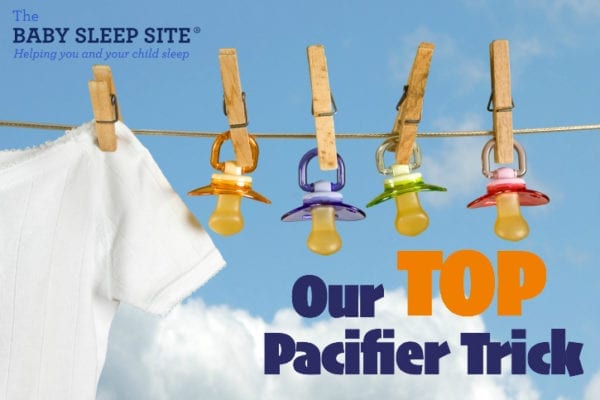 Love ’em or hate ’em, for many of us, pacifiers are a necessity. It’s estimated that anywhere from 75% – 85% of babies and toddlers have used a pacifier for soothing at some point. And it’s understandable – pacifiers can be a great way to provide instant soothing and to calm fussy, inconsolable babies or toddlers. (That’s the love ’em part!)

But the problem is that pacifier use can quickly become habitual – before you know it, offering a pacifier occasionally for comfort turns into offering a pacifier constantly, so that you can get your baby or toddler to sleep. And that can turn into being woken multiple times each night by a little one who is screaming for you to come and replace the pacifier that fell out of her mouth. (That’s the hate ’em part!)

We’ve written before about pacifiers and sleep: check out this article on pacifier basics, and this one on how and when to wean from the pacifier. But today, we’re taking a look at something new. Today, we’re talking about a super clever pacifier trick that every parent with a pacifier-loving little one at home should know.

What’s the trick? How does it work? Read on, readers – this one’s too good to miss!

‘The Dream Paci’ Tip, Care of The Hint Mama

Today’s pacifier tip actually comes from a friend of The Baby Sleep Site – it’s from Jennifer Saranow Schultz, also known as Hint Mama. Jennifer’s blog is known for its practical tips, designed to make parenting cheaper, easier, and (as she puts it) a bit more humorous!

All of Jennifer’s tips are great, but we were particularly excited about her ‘Dream Paci’ tip. We knew this was one that our own readers would appreciate. So, with Jennifer’s permission, we’re bringing The Dream Paci Tip to you today!

‘The Dream Paci’ Tip – How It Works

The Dream Paci Tip is basically a variation on the idea of a Dream Feed. Many of you are no doubt familiar with that idea – basically, you sneak into your baby’s room at night, after he’s fallen asleep, and wake him slightly. You wake him just enough to eat, but not so much that he’s entirely awake. The idea is that by ‘topping off’ with breastmilk or formula, you can actually increase the time between night feeds, and get a bit more sleep yourself.

The Dream Paci is similar – only it involves pacifiers, obviously ;). Here’s Hint Mama’s explanation (the post actually came from her husband — apparently, he handles their toddler’s night wakings. What a guy!) 🙂

…after several nights of waking up multiple times throughout the night to replace a missing pacifier, I followed a trick mentioned in many sleep training books and “sprinkled” multiple pacifiers (usually about six) in the crib when we said goodnight to our daughter. This “sprinkle,” which made it easy for our daughter to pick up a replacement pacifier in the middle of the night and go back to sleep without screaming, worked like a charm for about a month or so.

Then, our little pumpkin caught on to our trick and thought it would be a fun game to throw all the pacifiers out of the crib while she settled in for the night. Each evening, we could hear the sound of pacifiers bouncing on the ground one after the other, and she was back to waking up in the middle of the night screaming for us to come in and give her a pacifier.

And there was no question that she was doing this intentionally. One night, we watched on the video baby monitor as she pushed pacifiers through the holes in her crib onto the floor and even stood up to chuck one pacifier against the wall in her bedroom.

That’s when I came up with the “Dream Paci.” It works like this: Instead of putting all the pacifiers into our daughter’s crib when we tuck her in and she’s awake and aware that they are there, I now place two in the crib when she’s awake (and she throws these out of the crib as expected). Then, I tiptoe into her room later in the evening when she’s dreaming and fast asleep, and scatter the six pacifiers all around her crib.

If you decide to try The Dream Paci, however, just be sure that you don’t accidentally wake your baby or toddler up when you sneak into the room to do the pacifier sprinkle! That happened to Jennifer’s husband once:

So far, this trick has generally worked like a charm. The one exception: One night I woke our daughter up by accident when trying to sneak into her room. In retrospect, I probably went in before our daughter was fully asleep. So my advice to others trying to employ this trick would be to wait to do the dream paci until it’s been at least an hour from when your little one is asleep.

One final note, before we wrap up – remember that pacifier associations can be strong for lots of babies and toddlers. And while tips like this can be great solutions for some families, other families may find themselves in a position where they need to buckle down and solve the pacifier association once and for all. This is especially true for those families whose sleep is being seriously disrupted by the constant pacifier-related night wakings.

What do you think of The Dream Paci, readers? Have you tried something similar at home? Is this a tip you think would be helpful for your situation? Scroll down to weigh in, to ask questions, and to hear from other parents just like you!

27 thoughts on “The Pacifier Trick Every Parent Should Know”