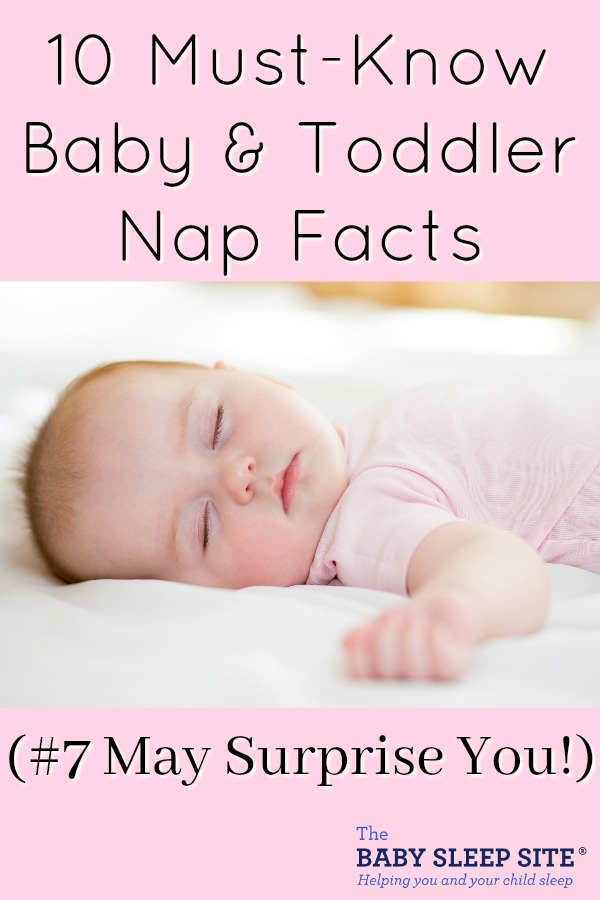 We’ve written quite a bit about baby and toddler naps here on the blog, so if you’ve been following our site for a while, you’ve had the chance to read a lot of baby and toddler nap tips and tidbits. But, some of you are new moms or new to The Baby Sleep Site® and we strive to educate all of our parents on the importance of good sleep and how to achieve it!

Today, we’re presenting you with 10 must-know facts about your baby’s or toddler’s naps. Think of it as your nap “cheat sheet”. 😉

10 Things You Need To Know About Baby and Toddler Naps

Nicole’s Note:
“But, of course, my son was very NON-textbook. He had 4 naps until 7 months old, because he simply could not stay awake longer than 1 hour 15 to 30 minutes without turning into Senor Cranky Pants! It was simply NOT fun to even try. So, I rolled with it and he stayed home all day pretty much until he seemed to change overnight, taking 3 naps at 7 1/2 months old. He then dropped to two naps a short month later at 8 1/2 months. It happened so fast! He also transitioned to one nap early and away from napping early. I would never have guessed that based on our first 7 months. So, if your baby is struggling with staying awake for long periods, he’s not alone and it could change fast for you, too! :)”

BONUS NAP TIP: We like you so much, we’re squeezing in a bonus tip for you! This one deals with short naps, an all-too-common problems for the parents in our Baby Sleep Site® community. The fact is, short naps are normal for newborns and young babies, but by about 6 months of age, most babies are able to take longer naps. Want all the details on why short naps happen, and how to fix the problem? Check out this article on short baby naps.

For even more nap and schedule help, check out these members-only resources, found in our VIP Members Area:

Not a VIP member? Not a problem! Join today, and you’ll receive instant access to our vast online library of sleep coaching resources. Plus, you’re certain to love the expert live chats, and our “Ask the Author” feature!

Don’t feel up to working on your baby or toddler’s nap challenges on your own? While our VIP Members Area is great for DIY moms who prefer to tackle sleep challenges on their own, we know that other moms much prefer to go straight to one-on-one help. Well, good news – we offer that, and you can start getting the personal help you need TODAY!

Once you make your choice and purchase, you will immediately receive an e-mail with your Helpdesk login information. You’ll be able to login and start your Family Sleep History form right away – it’s that simple!

Are you struggling with any of these 10 points? Have nap tips to share? We want to hear from you!