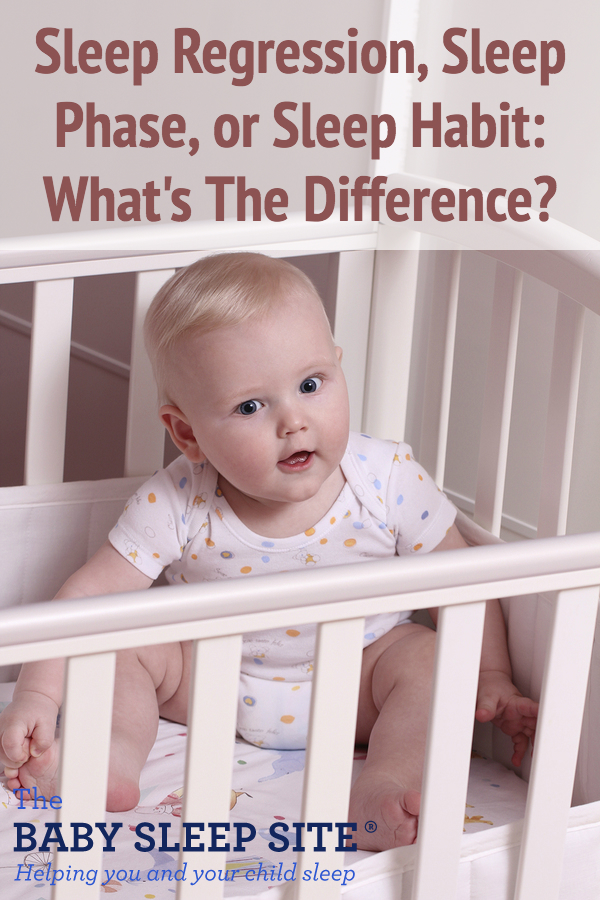 We’ve written quite a bit about sleep regressions on this site (in fact, Nicole herself was instrumental in coining that term!), and with good reason: your child goes through FIVE sleep regressions in the first year of life alone!

But how can you know for sure if something is a sleep regression?

How do you distinguish a sleep regression from a growth spurt?

What about a sleep regression vs. a funky phase that has no real explanation?

And, for that matter, how do you distinguish what seems like poor sleep due to a sleep regression from the kind of poor sleep that is the result of a newly-formed bad sleep habit?

Sleep Regression? Phase? Habit? How is a tired parent to tell the difference? Read on for answers!

Sleep Regressions – What You Need To Know

Before we launch into this article, it might be helpful to offer a bit of background information about sleep regressions.

One primary benefit we have over other parents is YOUR experience. What we mean by that is that, sure, everyone on The Baby Sleep Site® team has experience with our own children, but now that we’ve helped countless parents, we see patterns that most parents don’t have the luxury of seeing. We benefit from your experience and know the potential pitfalls to look out for; we glean these not only from our own experience as parents but from all of yours, too. It’s actually very interesting to put it all together!

Our experience tells us that MANY people will have sleep troubles around the same time:

These are all very common trouble spots and, as we always say, the biggest “danger” with these times is to make new long-term habits such that something that would have been temporary becomes a long-term sleep problem for you and your baby.

Are there other challenging times? You bet! The first two years (sometimes three) are difficult, regardless, but around 7 months, your baby begins developing separation anxiety, then there is teething, of course, and other issues like that come up here and there. Some will simply be more sensitive to all the changes than others.

Sleep Regression or Sleep Phase? How To Tell The Difference.

18 months is a close second, but if you aren’t careful, that strong independence-seeking stage can bleed into 2 and 3 years old and that’s a heck of a long “regression!”

Remember, at 4 months, your baby changes how he sleeps and while some will then begin to sleep better without you changing anything, he will never sleep the way he did when he was a newborn.

By contrast, at 8 months, this is generally a “blip” due to rapid development and the simple inability to sleep with so much going on in their minds. As long as you don’t inadvertently make some new long-term habits, your baby most likely will get past this in 3 to 6 weeks and go back to how he was sleeping before. If it was bad before, though, that may not be very desirable!

Every other “blip” in your baby’s sleep we would call a “phase.” Generally speaking, there are two distinct causes for a sleep phase: either your child is working on a new developmental milestone (whether you can see it or not), or your child’s external environment is changing in some way that impacts sleep.

Your baby learns a LOT in a short amount of time! Just to name a few, they learn names of objects, how to roll, crawl, pull up, stand up, sign language, and/or hand gestures, walk, talk, object permanence, eat, cause and effect, and so on. And, there are likely lots of “little” things we don’t even see that can cause sleep phases. All of that can make some babies feel unsettled, insecure, happy, tired, over-tired, excited, over-stimulated or all of the above! No wonder they can’t sleep, sometimes!

By contrast, some sleep phases can be caused by a disruption to your child’s usual environment.

For example, welcoming a new baby into your home and/or moving to a new house can both cause major sleep disruptions! Sleep tends to derail for a bit in both cases. Similarly, if you take a vacation, you can expect your child’s sleep to fall apart for a bit. And illness falls into this category, too; when your child is sick, you’ll have a rough sleep phase for awhile!

What About Sleep Habits? How Do Those Differ From Sleep Regressions and/or Sleep Phases?

There is no black and white as far as when you have a sleep regression, phase, or a habit, but our general rule of thumb is to wait 2-3 weeks to see what happens. If you have an abrupt sleep change, try to give your baby 2-3 weeks to see if something reveals itself. It could be a new tooth or a new “trick” or even an illness a few days later.

There is no reason to feel alarmed that something has changed in those first 2-3 weeks. But if, after 2-3 weeks, you are still dealing with the exact same issues – in other words, if the sleep problem has “stuck” – then that’s when we tend to tell people to treat the sleep issues as new habits, and to take action.

Now, we’ve been assuming, so far, that your baby was sleeping well and then suddenly wasn’t.

But if your baby wasn’t sleeping well before and then sleeping gets even worse, that would be another reason to start working on sleep sooner rather than later.

In the end, you know your baby best and, although you may be a new mom or on your third baby and forgot everything from your younger one(s), your instincts will guide you more than you think. As soon as you start to feel resentment or that you can barely function or, worse, your baby can barely function, it’s likely time to do something about it.

Although it may be your fault your baby won’t sleep, it doesn’t mean it has to stay that way. Only some babies will eventually grow out of their sleep problems. We work with parents of toddlers all the time still waiting for their baby to grow out of the same sleep problems they had at 4 months old!

How do YOU decide if your baby is going through a sleep regression, a phase, or a new sleep habit? Scroll down to share your tips and stories, to ask questions, and to hear from other parents like you!

18 thoughts on “Sleep Regression, Phase, or Habit – Which Is Causing Your Baby’s Sleep Problems?”